The 33rd One Day Symposium by the British Society of Perfumers was unusually stinky this year: armpit sweat and skatole overdoses, oh my! It’s an important date in the UK perfume calendar and this year’s event was once again held at Whittlebury Hall in Towcester, to a full audience of perfumers, evaluators, sales and marketing people. I was lucky to be put in the same group as Karen Gilbert with whom we had only just sniffed some gorgeous Osmotheque recreations, so the day offered us plenty of opportunities to compare notes.

The first item on the agenda was a talk by a bright, young PhD candidate Caroline Allen, who, with the help of Kate Williams (who was elected as the new BSP president during the AGM that followed), has been researching the effect of artificial fragrances on our ability to advertise and judge body odour. A few years ago another talk at the BSP explained the human major histocompatibility complex and its role in mate selection, so Caroline’s research is a perfect follow-up. Since it’s been shown that we prefer the scent of potential mates with an MHC type that is different to our own, how does using, say, underarm deodorant affect this?

What seems to be happening is that when people are left to choose their own fragrance, they pick a scent which enhances (advertises) their natural body odour in a good way, meaning that potential mates will not be thrown off scent. If a scent is randomly allocated (you wear something your gran bought you for Christmas even though you don’t like it, for instance), our own odour fingerprint still comes through, but not as well.

Caroline roped us into helping her by making us smell cotton pads soaked in armpit sweat. By recording our impressions using descriptive words (musky, sweet, floral… or in the case of one of the samples, onion, cumin…), we were able to contribute to the odour mapping work that Kate and her team have been doing at Seven Scent.

Incidentally, sample 32 (I think) smelled of sweet musk and fruit to me, and I felt very happy sniffing it – whereas others who sniffed it didn’t have the same reaction. Everyone’s impressions of each sample varied greatly, which in itself was fascinating.

These days follow a similar format – fragrance raw material suppliers present a selection of new materials or existing materials used in new ways. Presentations include demonstration formulae in various bases (candles, body creams, shampoos, detergents, fine fragrance and so on) and some go to great lengths to be creative with the way in which they show their materials off.

None more so than PFW who always seem to come up with an off-the-wall presentation. This year, their Master Perfumer, Pierre the Perfumer was the star of a truly frightening film-slash-demo formula, FRAGRANCESTEIN. 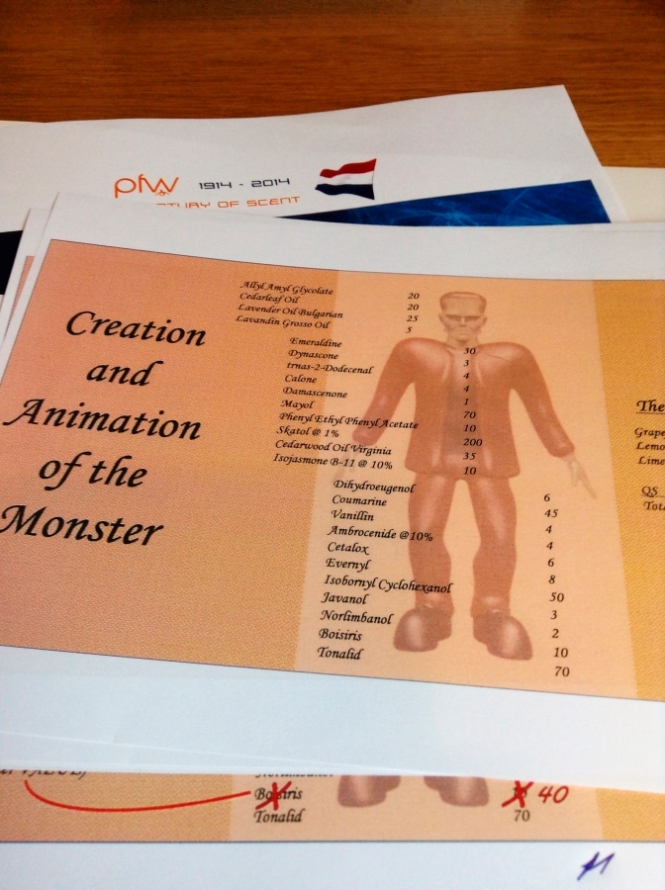 Keen-eyed readers will note the massive skatole overdose, and keen-nosed ones will know that it truly smells of excrement. Where indole has a mothball quality and flip-flops between poop and mothballs (and where with indole, once you’ve worked on enough floral accords containing it, your brain starts to construct a flower around it, so it no longer smells bad after a while)… with skatole, I am yet to arrive at such a happy state (and wonder if it’ll ever happen). It really does smell bad. So the challenge was – how to hide the ‘monster’ and create an accord that would not only be acceptable but pleasant and desirable to consumers.

Bit by bit, we followed Pierre on the silver screen as he tried to tame the monster. Body parts were replaced, the formula tweaked, and we could smell the transformation. Perhaps a little too influenced by the initial horror, many in the room did struggle to find the final accord pleasant, but that’s where being a trained nose can sometimes trip you up; if you smell the construction rather than the naive overall effect, you can sometimes miss an interesting piece of work. 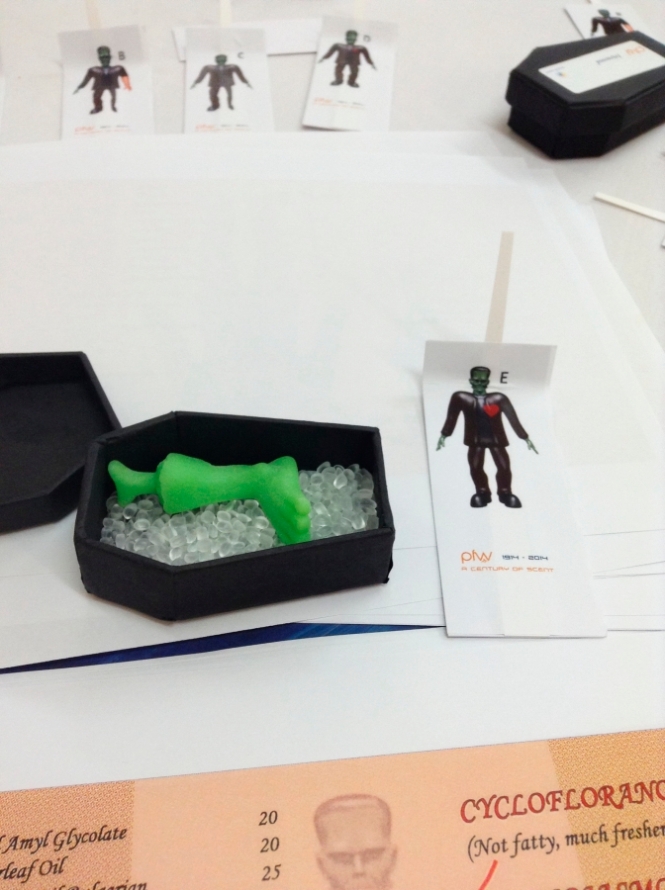 I’d like to put in a request to PFW: could we see Pierre the Perfumer in “The Man With Two Brains”, please?

I missed out on a PFW goodiebag (what was in there? Dare I ask?) because there wasn’t one on my chair, but did come home with lots of goodies. BSP has its own tote bag now, too! 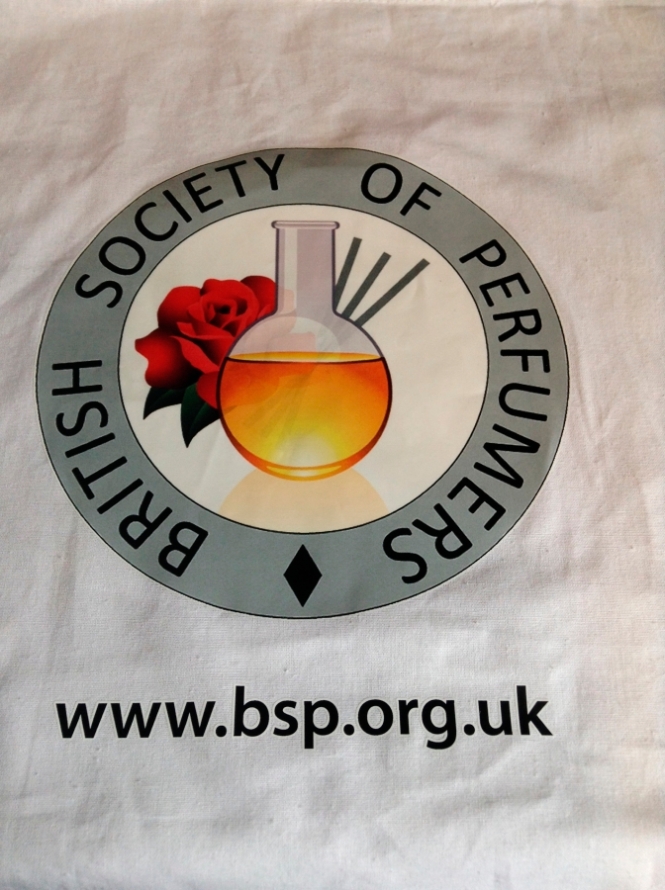 It wasn’t the only tote of the day; DRT, a company producing impressive volumes of a variety of chemicals all from trees gave us this lovely forest-themed tote: 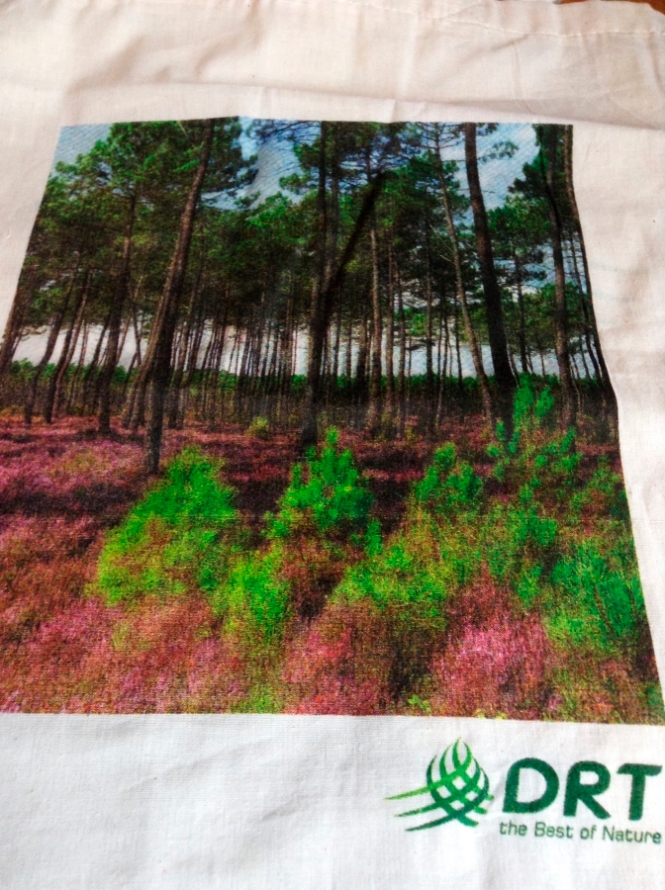 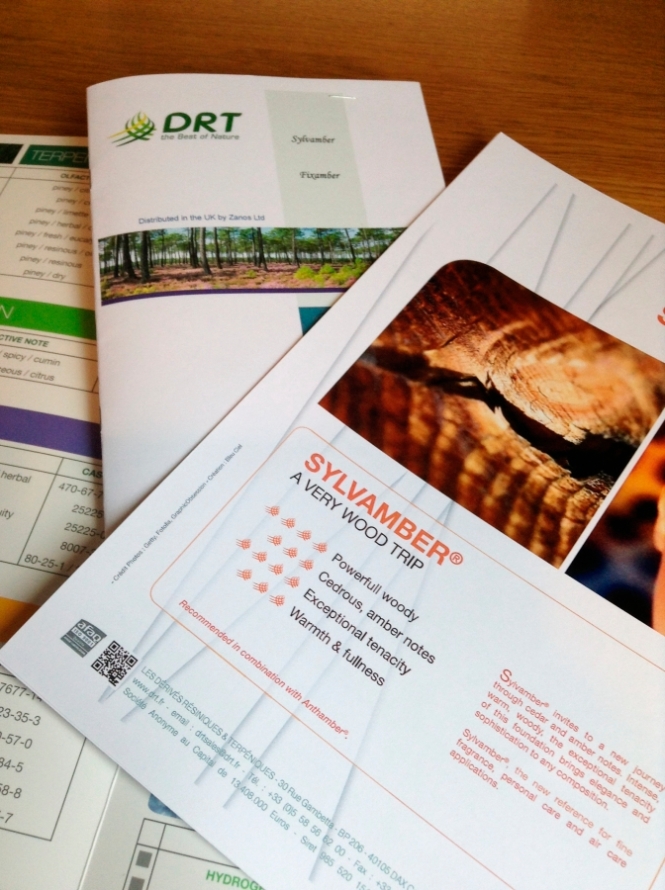 Two materials which really stuck in my mind from the Nactis/Synarome presentation were Oudharome and Agarome (the former having a lovely orris-type character more so than oudh, really); both made me want to rush into the lab and use them in something.

IFF‘s presentation of Amber Xtreme was another highlight of the day for me – they’d gone to real effort to make the session interactive and demonstrate the material in use. We experienced a floor cleaning application, laundry care, hair care and fine fragrance – all at different concentrations; all very effective. I was a ‘volunteer’ (read: everyone else suddenly found the ceiling really interesting). My job was to cover a large floor tile with suds. 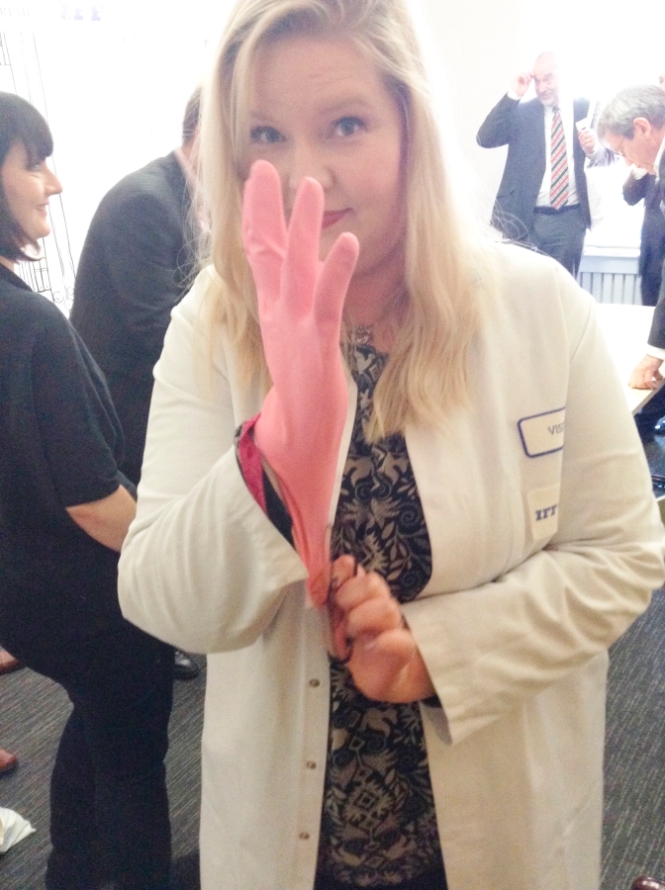 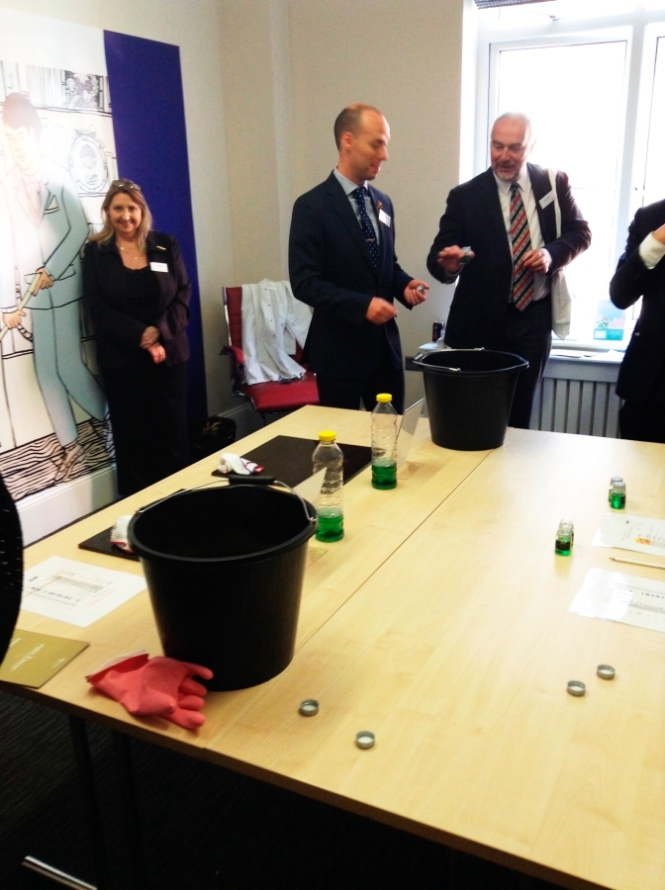 At least it didn’t turn out to be an ice bucket challenge! 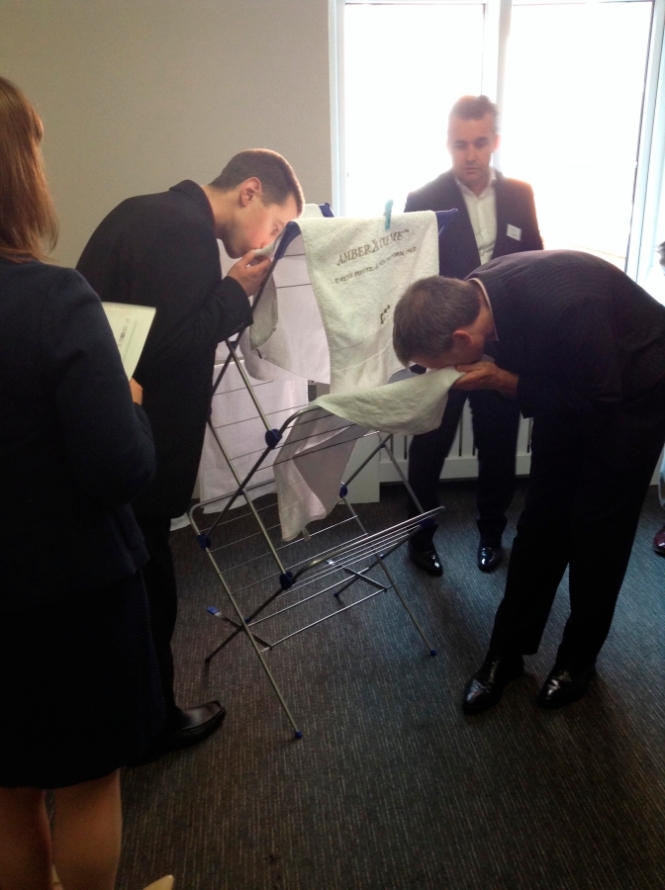 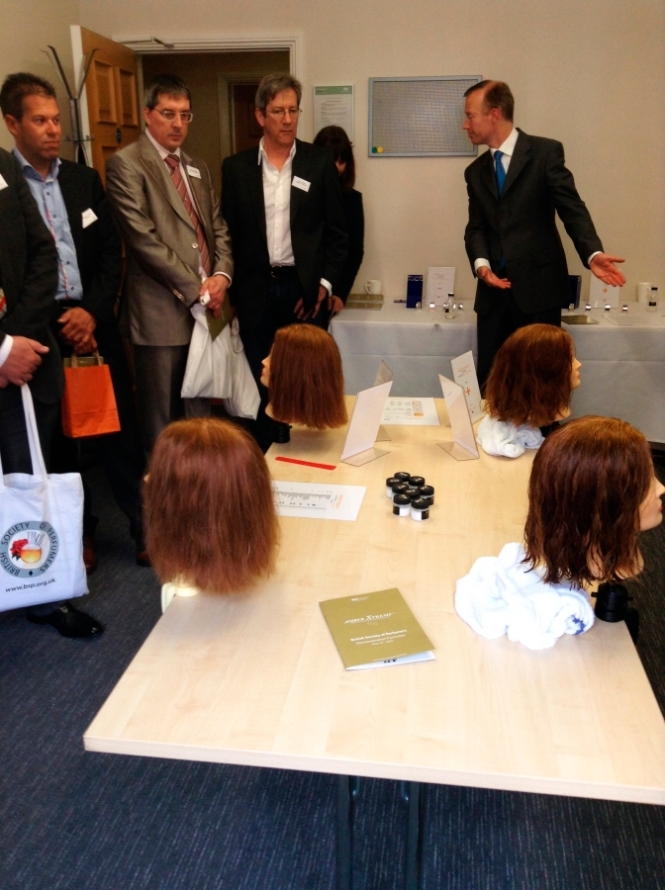 This material is POTENT. I see where the Xtreme comes in, really – a trace in fine fragrance still somewhat dominated the blend, and very small amounts had noticeable effects in other applications. I also love the jaunty whale illustration. It almost has a Japanese quality to it. “Here I am, sending my magic poop into the ocean!”

We were also given generous goodiebags with a new perfumer’s fragrance ingredients compendium, demo bottles of Amber Xtreme and a pen.

The day went by fast and I am already looking forward to next year’s symposium. There will be other BSP events before then, of course, and it’s worth keeping an eye out for additions to the calendar – even if you are not a member but happen to be interested in this crazy, poop and sweat-scented world!

When an email with the above header popped into my inbox, I booked a ticket immediately. How could I not? Somehow I’d missed several opportunities to visit the Osmotheque – I wasn’t about to miss this one!

The event was held in Brasserie Zedel for 50 lucky guests, including a bit of a familiar cast of UK perfume-lovers whose company made the day all the more wonderful. We started off with a glass of sparkling wine, sandwiches and little cakes. For some reason the table I was sitting at was immediately branded “the naughty corner” by Odette and Jo. I’m sure we proved them wrong by our impeccable behaviour throughout. The whole day whooshed past – it was absolutely worth every penny – and my only regret is not having taken a proper camera. Of course the most important souvenir from yesterday is the pile of carefully wrapped up scent strips, doused in antique perfumes which we were allowed to keep. I’ll take them out and sniff them on special occasions.

Perfumer and Osmocurator Stephanie Bakouche gave a thoroughly enjoyable presentation, briefly covering perfume history and then each of the houses we were to experience perfumes from. Guerlain, Bourjois, Coty and Poiret were on the cards (figuratively and literally).

My favourite scent above all from the selection was the outrageous tuberose-laden original Parfum des Champs Élysées – heady, sweet, animalic, sensual; dripping with nectar. Guerlain’s Chypre de Paris was also glorious, and not how we think of a chypre today; it smelled very much like Imperial Leather soap, actually. For some reason Coty always gets credit for ‘the first chypre’ (even though it wasn’t), and we were lucky enough to smell that, too. It took me by surprise – a banana note (amyl salicylate?) over animalic, mossy base. Not at all what I expected. 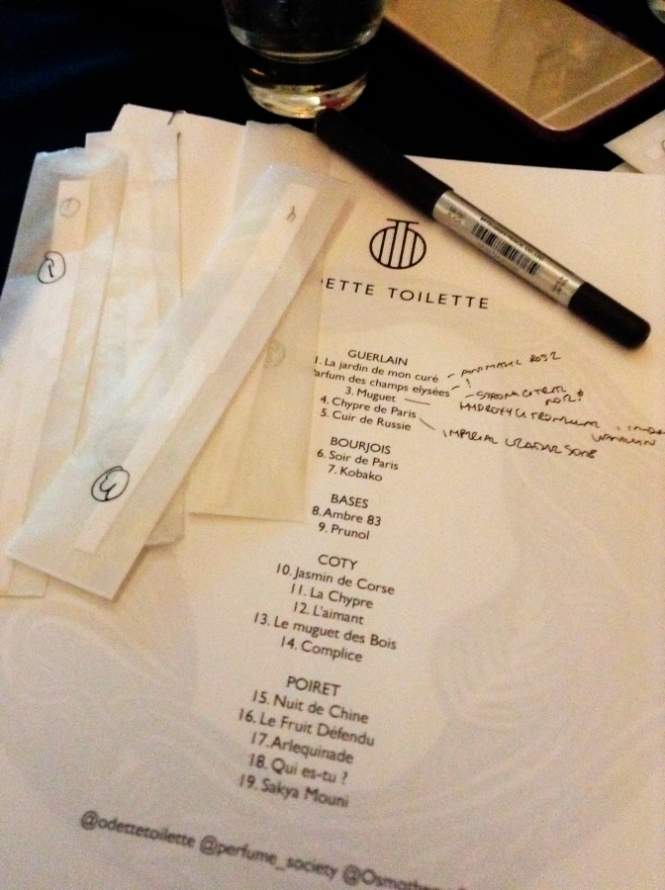 The most educational perfume of the night for me was from the bonus round (not listed): original Eau Sauvage. Educational because as soon as I smelled it, I realised Ô de Lancôme and Eau Dynamisante owe their character to it, and that it really represents a trend in its own right.

La Jardin de Mon Curé was a big, animalic rose, the Muguet was not at all like the way we think of lily-of-the-valley accords nowadays (I got a strong citral note, indole, vanillin, and we thought hydroxycitronellal, too), Cuir de Russie recalled Finnish tervapastilli (birch tar sweets), Soir de  Paris was a powdery, animalic clove, Kobako had a glorious, dry, almost 70s feel, Jasmin de Corse was very indolic, yet balanced, L’Aimant was floral carnation and not as powdery as the modern version, Le Muguet des Bois was beautifully described by Karen Gilbert as “the end of an orange lolly when you get to the stick” and I immediately got what she meant (whereas the others at our table didn’t – Karen and I must have been eating the same orange lollies!). It was more recognisable as ‘lily of the valley’ than the earlier Guerlain Muguet, too. From Poiret, the scents seemed to divide opinion – I was fascinated by Le Fruit Défendu, which made me think of marzipan fruits and I couldn’t get that impression out of my head after the thought popped in there.

Before the official talk, our table also had a little sneak peek preview of a special scent created by 4160Tuesdays for Louise Woollam (whose parosmia has made scent appreciation a difficult task. Violets were among the few acceptable fragrance notes at the time, so a violet perfume was born. It’s a gorgeous blend of ionones and violet leaf which will be launched soon, I hear).

Odette Toilette and The Perfume Society are running this event again on the 27th of June – book as soon as you can because it’s likely to sell out fast. 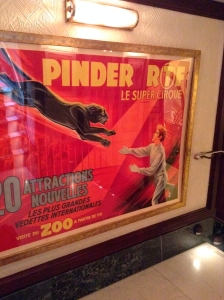 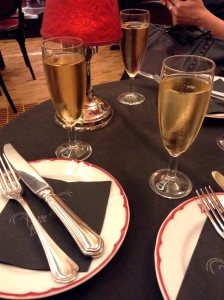 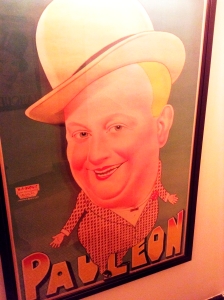